Please scroll down, main content displays below the 'Events' listing

Our club was founded by our current instructor in 2005 and was originally based at the White Hill Sport Centre in Chesham and named "Chesham Town Jitsu Club".

In 2008 we moved to our current dojo at the Royal British Legion Hall in Old Amersham and, supported by a sizeable grant from the National Lottery, purchased a 72 m2 International Judo Federation approved mat which is fantastic to train on. Despite the move we stuck with the old name as it was easier for administration and we didn't know how long we would be in Amersham. 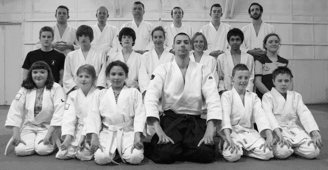 In 2012 we dropped the "Town" designation (traditionally used to distinguish university and non-university clubs) at the request of our governing body who were phasing out that naming convention.

At the start of 2017, as part of the relaunch of our website, to recognise the wider geographic area from which we draw our membership and in response to our governing body reverting to "The Jiu Jitsu Foundation" we renamed the club to "Chiltern Jiu Jitsu" and adopted our new, distinctive logo in-place of the Jiu Jitsu Foundation logo.

The new logo consists of a Red Kite soaring over the Chiltern Hills and the kanji for Jiu Jitsu.

So we've changed the name, we've changed the venue what we haven't changed is that we are a not-for-profit organisation dedicated to providing the opportunity for others to learn the martial art we love in a friendly atmosphere.

Chesham Jiu Jitsu Club is part of the Thames Valley region which currently includes clubs in Oxford (university and town), Uxbridge (Brunel University), Reading (university), Alton & Tadley. We are also close to the London region which has around 20 clubs, primarily in central London.

You have declined cookies. This decision can be reversed.

You have allowed cookies to be placed on your computer. This decision can be reversed.